Since we were established in 1990, Vox Pops International have pioneered new ways of using video to collate and deliver market research. In the last 7 years, there has been significant growth in the video research sector, primarily with the advent of mobile technology and the ease of filming, with all the signs that it will continue to develop and innovate.

This year VPI held a conference, chaired by the IMA’s chief executive, James Wycherley, to give insight professionals the chance to learn how teams at leading brands and organisations innovating with video. The focus was on how key clients are using video as a tool to both visualise customer insight and to communicate insight across a business – making a real impact.

As told in James Wycherley’s anecdote, ‘a great insight badly communicated sinks without trace, whilst a good insight brilliantly communicated will spread like wildfire.’

After introductions, Sarah Jousiffe from Sky discussed how they implemented a customer closeness programme, aimed at transforming senior management’s understanding of different customer segments. This initiative included photos, sound showers, customers’ artefacts and 360 degree videos. An interactive ‘meet-the-customer-zone’ was created and set up in the reception area at Sky’s head office in Osterley where staff could step virtually into the homes and daily lives of their customers.

Pete Norris, Head of Production at Vox Pops International then spoke about Automated Animations which help bring data to life at the click of a mouse. These video infographics are powered by a spreadsheet, or any data source, and automatically adjust based on the changing data. Multiple versions of an animation can be created once the updates have been re-synchronised.

Manjit Galsinh from Highways England then spoke about how they have also created an Insight Hub with Vox Pops International comprising to house their videos. They focus on new insights and convey core stats and key truths derived from many pieces of market research. It takes a lot of time and effort to aggregate findings and to paint big pictures like this and having videos makes them digestible and easy to access for everyone in the organisation. This then helps drive change, understanding and action.

Chantelle Haywood, Senior Project Manager at Vox Pops International, went on to share 2 international case studies. Firstly, she outlined a project for FWD, a challenger insurance brand in Asia. FWD created a series of customer films to develop the customer journey and communicate 2 of their target customer segments. These videos helped their teams in the Philippines to understand how a specific segment think, feel and live their lives – as well as being used as primary research to improve the digital customer experience.

The second case study was a 2 year long project Vox Pops International conducted with Unilever, filming and interviewing consumers from 30 markets around the world and creating daily videos of womens’ lives, thoughts and feelings. Vox Pops created an insight portal to house 400+ videos that was searchable, had transcripts and the ability to download and do further editing.

The final presentation was given by Co-op Insurance, by Daf Singleton and Mike Stone from Idomoo.  Daf’s presentation was all about the use of personalised animations to communicate with motor insurance policyholders in a clear and easy way.  They have the objective to be the easiest and most trusted insurer to use.

This will fulfil many objectives, one being that the FCA are pressuring financial organisations to be clear so that consumers can understand claims, terms and what they sign up for.   Other clear benefits of getting this right is bringing down the number of calls into call centres, from people who have problems with claims and also understanding what they are covered or not covered for.

Co-op conducted research and found out that 80% said they would watch an explainer film with 39% saying the ease and simplicity appealed to them.  Co-op then built a prototype ensuring that the right content was included in the narrative, at the right time to engage them. The notion of personalisation scored very highly.

Idomoo have the platform to distribute individually tailored animations to over 100,000 individuals. Vox Pops International, as a long standing supplier to Co-op Insurance, were asked to create the individual animations.

The results were outstanding.  85% of those receiving the explainer animation found it useful, 74% watched all the way through to the end, there was a high incidence of people watching more than one.  Importantly, benefits to business were clearly seen as there was a 14% decline in policy clarification queries.

To round up the event, there was a panel discussion that comprised of Sarah from Sky, Diane from VPI, Manjit from Highways England and Manjeet Kumari-Lal, Head of Strategic Communications and Planning at Ministry of Justice UK, HMCTS. The panel was chaired by James Wycherley and focussed on the future ways to use video in insight and comms generally.

Key outtakes from this were the absolute need to communicate insights more, how those organisations who use it a lot look for varied and new methodologies to keep it varied, including 360, observational timelapse and augmented reality. It was agreed that the increase in video ‘data’ has led to more need for ‘curators’ and video storytellers, as many do not have the time in house to go through hours and hours of footage. Also, the role of a video interviewer was recognised as a skilled one and one which needs training for. 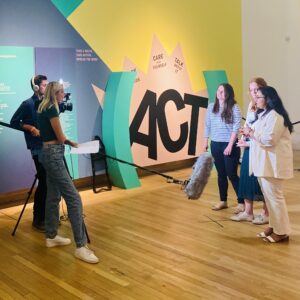 Why are vox pops important?

The phrase ‘vox pops‘ might be new to some people, but what if you’ve known about them all along? Often considered the ‘vital ingredient’ in 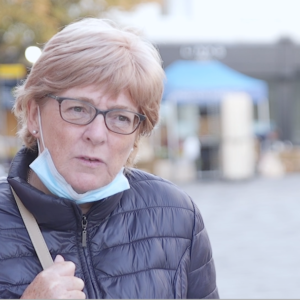 How to write a vox pop questionnaire